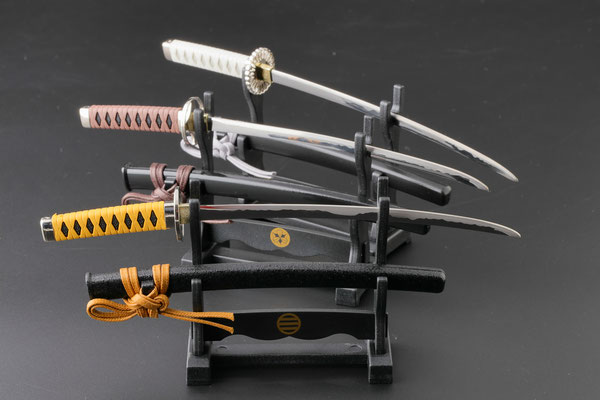 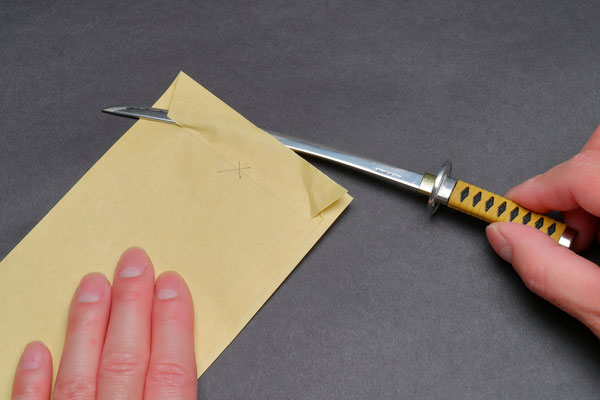 The “Katana Letter Opener” is a paper knife with a Japanese sword "katana" motif. It is a commodity made with particular attention to detail. Quality of its sharpness is amazing since it is handmade by experienced craftsmen in Seki city, Gifu Prefecture which renowned for its samurai sword-making history.
Besides using as the letter opener, it is a good looking decoration that feel a sense of fun! 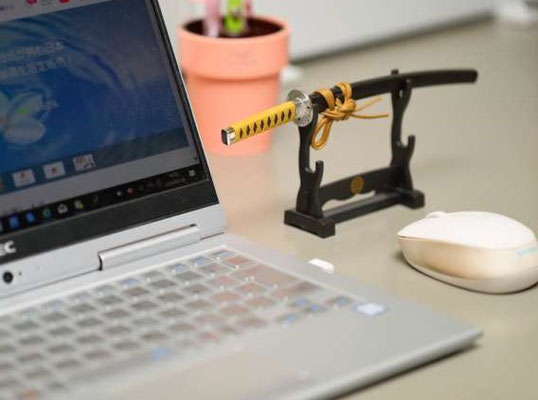 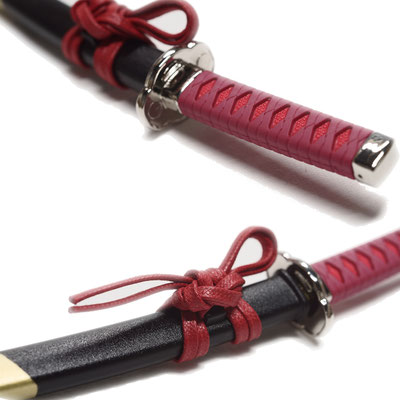 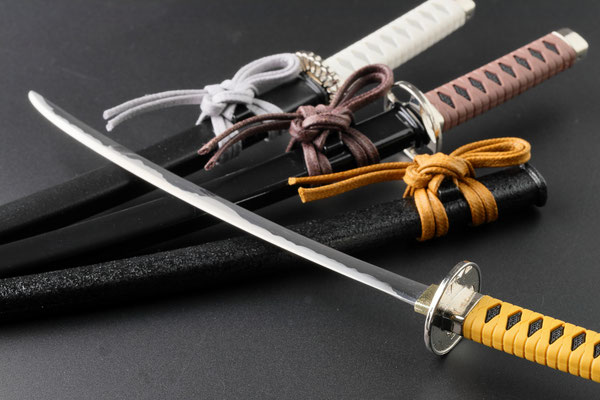 This is no ordinary letter opener. It has been styled to perfectly resemble and miniaturized a genuine meitō.
Among the traditional Japanese swords called "nihontō  日本刀”, the  particularly superior swords, being crafted by master swordsmiths having a certain reputation are called meitō. The famous samurais are widely known for having his own meitō sword.

There are four models on offer. All models are faithfully reproduces from design of the scabbard to blade crest shape. And these are quite a full-fledged product that applies properly heat-treated by skillful craftsman. Length of the sword is about 20 cm long. The blades are made of stainless steel with a polished finish by craftsman one by one. Other parts are made of A.B.S elastomer.

In combination with the colored handle, the knives have an efficient, cool look.

☟click on the picture to show in large size!

The original sword owned by Kondo Isami (1834-1868), who was a Japanese swordsman and official of the late Edo period. He was the fourth generation master of Tennen Rishin-ryu and was famous for his role as commander of the Shinsengumi*.

Following the battles at the Ikedaya incident, Kondo wrote a letter to his father-in-law, saying "my sword is safe, because my sword is a Kotetsu" - a remarkably famous quote amongst Japanese history fans.

In the year of 1208 A.D. (Kamakura period), the Emperor Gotoba granted permission to Norimune, to engrave the imperial chrysanthemum crest (KIKU) on swords he forged, which was undoubtedly honorable. Also, he engraved "一 "(ICHI in Japanese, means the number one) below the crest. This is why it is called "kikuichimonji".

It is said that this sword belonged to great swordsman Okita Souji (1842- 1868), who was the captain of the first unit of the Shinsengumi*.

Saito Hajime (1844-1915) was the most famously served as the captain of the 3rd unit of Shinsengumi*.

He was known to be the man with the best sword-fighting skills in Shinsengumi, and also he was one of the few core members who survived the numerous wars. He was later fought in the civil Seinan war (1877), a revolt of disaffected samurai against the new imperial government. Saito was indeed a man whose life was with his sword, even in the era when swords were rendered obsolete.

Oda Nobunaga, a powerful feudal lord of Japan in late 16C who almost succeeded in unifying the country during the tumultuous generations-long civil war known as the Sengoku period.

The motif is his beloved sword, “Heshikiri-Hasebe”. Specifically, a sword he was said to swing with such force that it both crushed and cut the target. The original sword is one of the ten high apprentices of Masamune (正宗, master of sword smiths), and is currently designated as Japan's national treasure.

* Shinsengumi (新撰組);  worked for Tokugawa government to combat against anti-government clans at the end of Edo period.

There are so many TV series and movies that are made based on what happened to Shinsengumi. 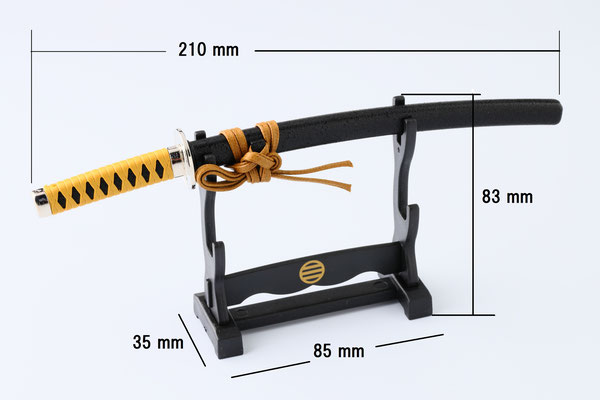 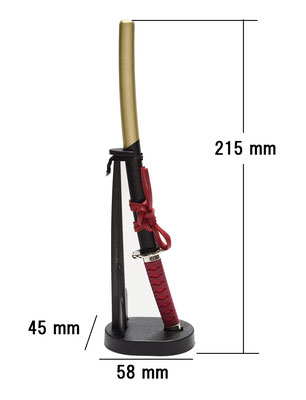 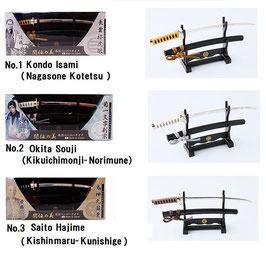 Historically valuable and popular pieces are reproduced realistically in mini size as a functional letter opener.

Included two-tiered display stand, allowing you to keep the sword sheathed or place the scabbard on a different level of the rack so that you can admire the naked blade as well.

* no signature on swords 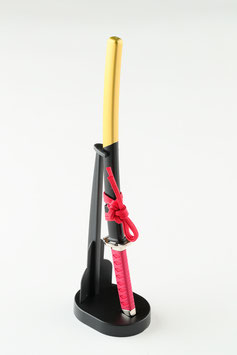 The motif is Oda Nobunaga's beloved sword "Heshikiri-Hasebe". The historically valuable and popular piece is reproduced realistically in some 20cm mini size as a functional letter opener.

The scabbard is black and gold in two tones and has a dignified presence for Oda Nobunaga's majesty.

* with the signature "圧切長谷部" printed on the blade

* Color might be slightly different from the actual products due to different device screen settings.

* This product has been made purely for letter opener. You should not use this for cutter knife, or swing it,

because doing so may result in the sword blade coming break etc.

Seki-city in Japan is highly regarded as “the world’s third largest cutlery producing area” along with Solingen in Germany and Sheffield in England.

Sword-making began in Seki in the Kamakura Era over 700 years ago. Seki's reputation for swords that "hard to break and bend, and cut cleanly" spread all over the country and it is said that during the Sengoku age of civil strife, Seki swords in particular were popular among the samurai..

Its skill and quality supported by history and tradition are appreciated not only in Japan but also overseas. Seki-city, which has grown to become a world brand, has three important conditions for producing of cutlery. The first one is an abundant water source of the Nagara river. The second one is the coal for quenching. And the third is the red clay painted when making a blade. Even today as the industry has been modernized, the rich natural environment of water, mountains and soil supports the cutting tool industry.

Seki city have a "Hamono Festival" dedicated to edged tools every October. 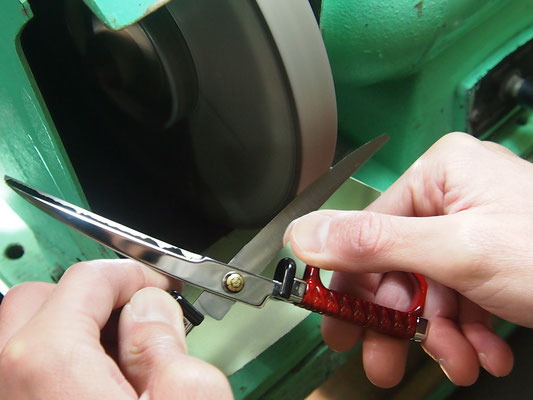 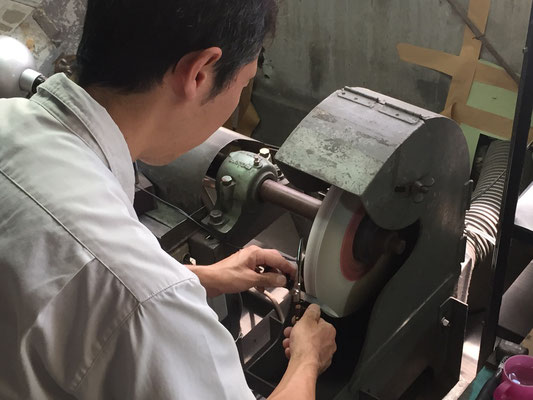 Nikken Cutlery Co., Ltd., founded in 1946, has been manufacturing high quality products in Seki City, Gifu Prefecture which renowned for its Samurai sword-making history, nowadays has a long flourished as a town of cutlery.

They have been putted the effort into kitchen knives, scissors and various cutting tools mainly. They are also going to expanding a category of products and continue to offer attractive and creative products that generate a new value worldwide.
Now, we would like to introducing you above one of their most successful and lately model which are beautifully created by a skilled blade craftsman with a bit of samurai sprits!