You can see OJizo-sama in a lot of places around Japan.

Jizo is the most popular Buddha in Japan, we can find them frequently on the roadside as well as temple's garden.

After the Gautama Siddhaarhta's death, by the time Maitreya Bodhisattva will have attain enlightenment 56 billion and 70 million years later, there hasn't been no Buddha who can relieve people in this world. It's so bad situation, so Jizo decided to stay in this world and relieve people. As Jizo exists in this world, the appearance is like human monk, wearing a robe.

Moreover, Jizo is also identified with the travelers' guardian deity, so we can see it often on the roadside.

In Japanese language, prefix "O" and surffix "sama" are used to add a feeling of politeness or respect to a object or person.

Therefore, we use here "O-JIzo-sama".

We introduce you the decoration object "O-Jiizo-sama" figurine from Kutani ware. It is wearing the elegant robe that is drawn decoratively with three-dimensional painting "Mori" (盛) or small dots painting "Aochibu" (青粒), which are the unique ceramic painting technique of Kutani ware.

*Please understand that there are some shades of color (unevenness) as it is coloring by handwork.

Unique technique often used in Kutani's ornaments such as lions and beckoning cats. Three-dimensional patterns and textures are expressed using a special high-viscosity paint, resulting in a bold and stimulating product.

Squeezing out paint as if decorating a cake with cream.

Fine blue-green points called the "blue grains" are line up on the ground color to create classiness. A great deal of skill is required to make the dots the same size, evenly spaced, and the same color.

Besides blue grains, there are also white grains and gold grains. 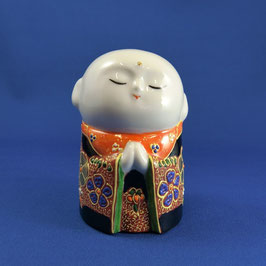 Kutani ware "O-Jiizo-sama" Figurine with a gentle and meek expression.

It is wearing the elegant black robe with flower pattern which drawn decoratively with three-dimensional painting "Mori" (盛), a painting technique of Kutani ware. 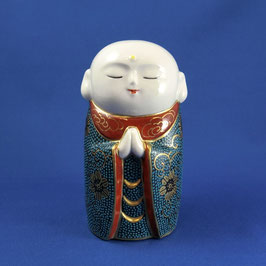 Kutani ware "O-Jiizo-sama" Figurine with a gentle and meek expression.

Small dots in blue are applied to the background to create a special texture, it is called "Aochibu" (青粒) paiting technique in Kutani ware. And, the gold arabesque patterns are vividly drawn on it, giving it a luxurious look.