Anything, from Toyohashi in Aichi Prefecture, 300 km west of Tokyo, has revived the authentic classical maekake with the original thickness and texture.

Maekake is a traditional style of Japanese apron, tied at the hips and worn by craftsmen and the staff of certain shops like a sake merchants and rice dealers. The name 'maekake' is consisting of the Japanese word for mae, meaning 'in front of' and the verb kakeru, 'hanging'.


While being quite simple in design – a rectangular indigo blue cotton canvas with long straps to tie around the waist – the maekake apron also eases strain on the lower-back by supporting the pelvis when lifting heavy objects. And furthermore, people use the Maekake as shoulder padding.

These maekake aprons, carefully made by weaving thick threads using the shuttle loom invented during the Meiji and Taisho eras (about 100 ~ 150 years ago), are strong and durable while fitting around the body softly in spite of the thick fabric. All manufacturing processes are carried out in Japan, and these maekake aprons are brought to life through careful manufacturing unique to Japan.

It is said that maekake apron was born in the 15th century. Back in those days, fishermen would cut aprons from old sailcloth and reused to bound them around their waists. That's why the garment's full and formal name is "ho-maekake", or "sailcloth apron".

The maekake's popularity peaked after Second world War. During the dramatic expansion of Japan's post-war economy, maekake production boomed, and aprons printed with a shop or company name spread among sake breweries and food industry. 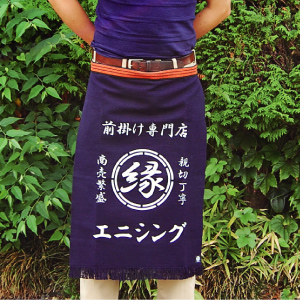 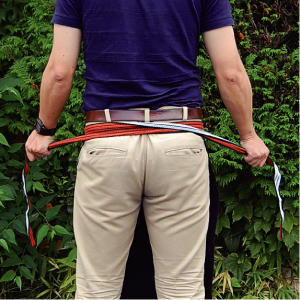 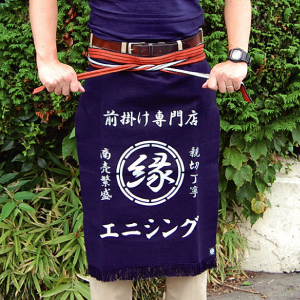 To wear Japanese waist apron, wrap the belt all the way around your hips and tie the belt in front about 3cm below the navel.
When you tie Maekake, you feel that you become motivated!!

◆ available in one size and 4 design on our online-shop 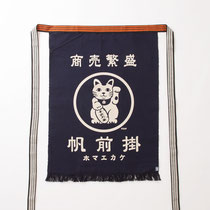 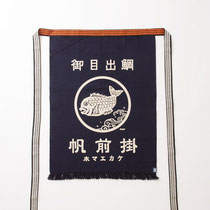 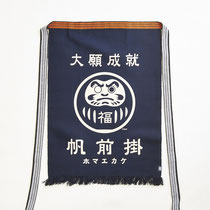 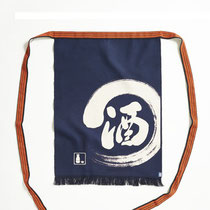 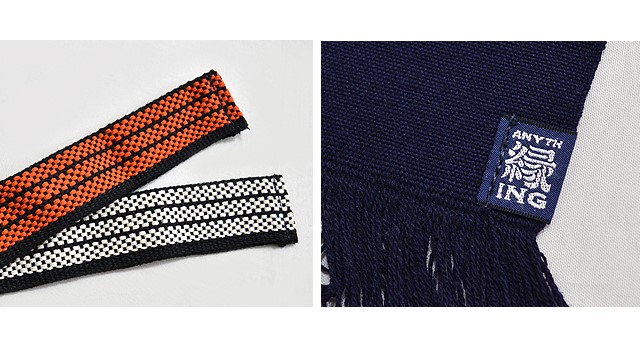 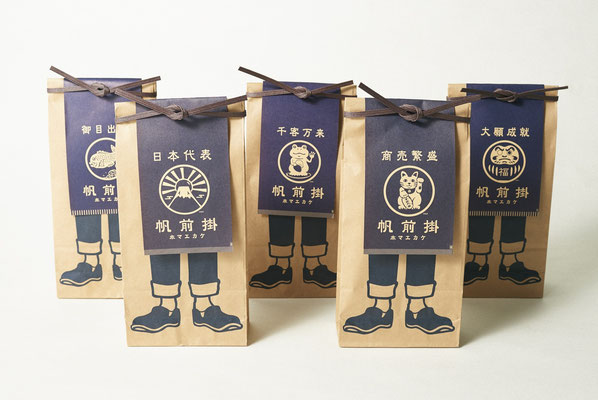 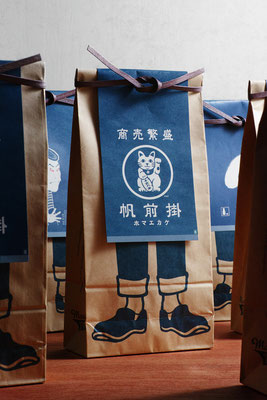 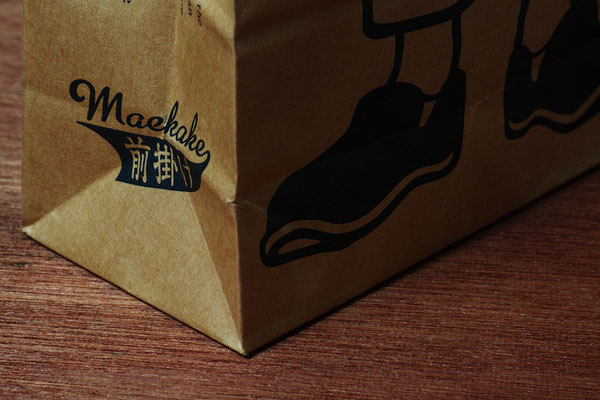 [Packaging]   - Item will be delivered in a paper bag inspired by a rice-package!  -

Printed on the front is a pair of legs and a sample maekake hangs from the top. A traditional mizuhiki knot on top also mirrors the belt that ties around the waist. 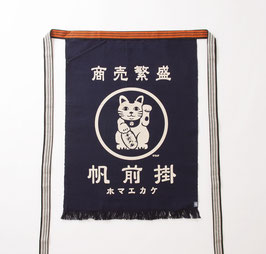 67 cm unisex waist apron with fringed hem made of durable but soft canvas fabric for easy and comfortable to wear. At the hem of the apron is fringed. With a thickly woven, double-sided band, white on one side and bright orange on the other. Kanji characters and Japanese traditional motif are printed on the apron. Available in 4 design. Comes in the nice paper bag.

● Made in Toyohashi, Japan

Machine washable, however, please be advised the followings.

Mr. Kazuhiro Nishimura established “Anything” in 2000. The name of “Anything” originated in “Enishi”, Enishi means “the bond”.

The center of maekake production in the early days was Toyohashi, in Aichi prefecture. Near here is where the world famous auto manufacturer Toyoda Automatic Loom Works, Ltd. were founded in 1926, who produced the most modern automatic looms at the time and which later became the automobile manufacturer TOYOTA.

Some of these old looms are still in use in Toyohashi today, but this textile town's heyday has long since passed.

On this tide of times, young founder Mr. Nishimura started to collaborate with a craftsman who has skill about shuttle loom to ensure that traditional Japanese aprons do not fall into oblivion, and finally, they revived the classic Japanese waist apron.

Anything is the only one maker which can produce maekake apron from the weaving.

In this way, stylish Japanese maekake apron inherited the valuable skill. The maekake gets high reputation from overseas. 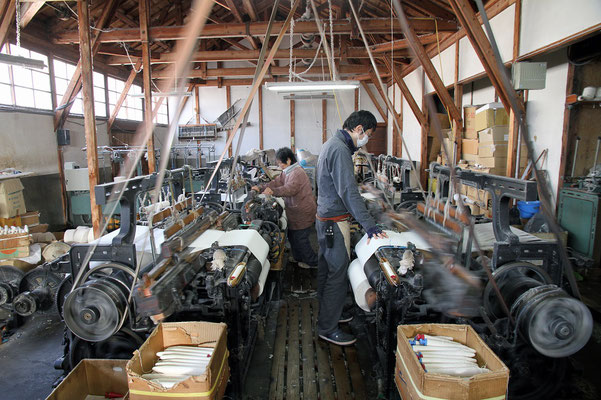 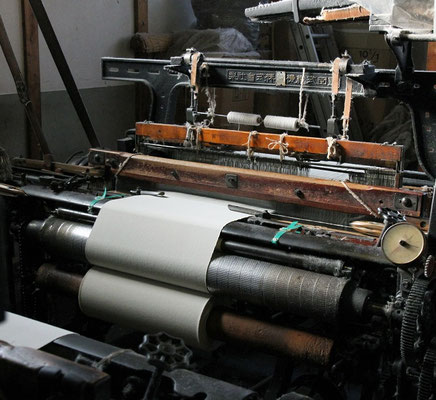 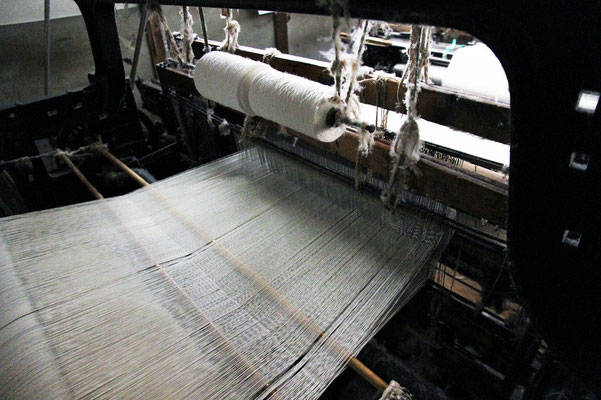 classical shuttle loom
The shuttle loom was created 100 years ago. The name is “N style shuttle loom” by Toyota. Now, this machine works only in the atelier of Anything.

Among the countless warp, the shuttle with weft goes and returns. The speed of shuttle is 1 going and returning per 1 second.
So, the shuttle goes and returns 120～140 times per minute. Workers need to exchange the shuttle once in 7 minutes.
To make a maekake apron, 2 exchanges of the shuttle are needed. Classical machine is easy to be broken, but easy to be repaired as well. Therefore, people can use it for a long time. However, workers always need to make fine adjustments. This classical shuttle loom needs the eyes and help of craftsmen.