Katazome (型染め) is a Japanese method of dyeing papers using a pattern form ?

Katazome is a traditional Japanese stencil technique for dying fabric and paper.

They are handmade in a traditional doll-making company in Kyoto.

A rice paste is pushed through the open areas of a stencil, thus creating a resist during the later painting or dying process with fabric.

In case of dying paper, ink is painted through the stencil's open areas directly.

The following report is based on my experience with this technique during a class at the studio of John Marshall in Covelo, USA, in the Summer of 2010. 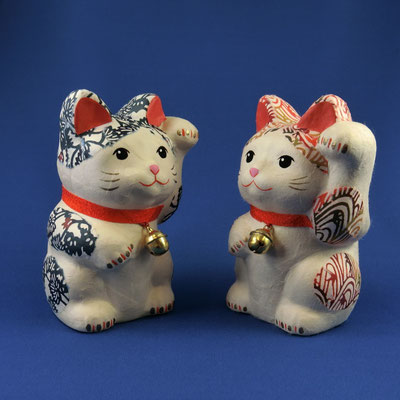 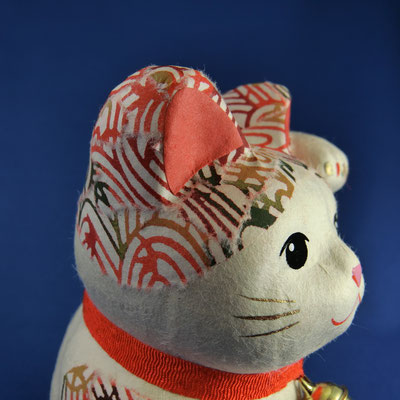 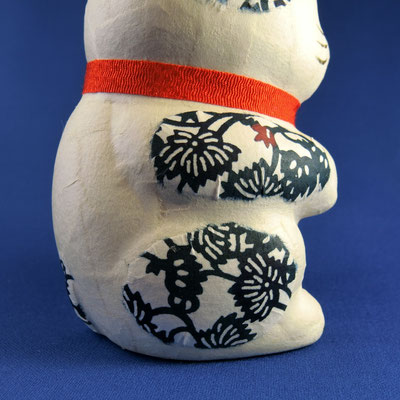 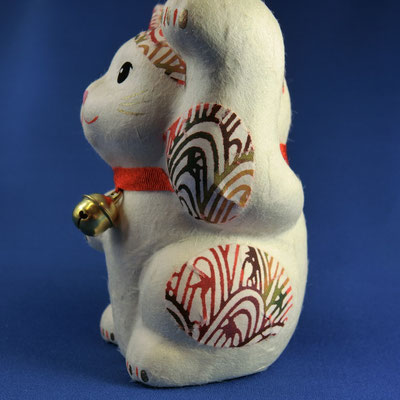 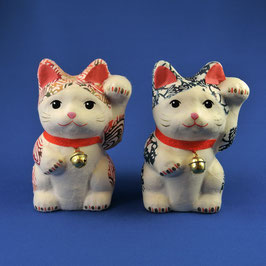 An entirely new lucky cat made by using skills and techniques cultivated in doll crafting.

Raising its right paw, it is said that maneki-neko is beckoning economic prosperity.

Three kinds of color options are available in our online shop.

production... made in Japan

Seto City, located in Aichi Prefecture in central Japan, is surrounded by low hills of 100 to 300 meters in height and enjoys a mild climate. In addition to its favorable topography and climate, Seto City is rich in an abundance of excellent resources for pottery, such as kaolin clay and silica sand (glass material). Being endowed with raw materials for both earthenware and porcelain, Seto City has developed into a leading pottery production center in Japan, contributing to the progress of Japan's ceramics culture.

Ceramics produced in Seto City are known as Setomono (Seto ware), which has become a generic word for ceramics not only in Japan but also world-wide. Having a history of over 1,000 years and a matching tradition, Seto ware represents Japanese ceramic culture and traditions.

Seto ware originated during the Heian Period (8-12th century.). During the Kamakura (12-14th century) and Muromachi (14-16th century) periods, Seto was the only pottery center in Japan that produced glazed ceramics. Supported by its excellent locally-available resources and advanced technologies, Seto has constantly been leading other production centers throughout its long history. In particular, the development of Seto-sometsuke (blue-and-white) style porcelain was truly epoch-making: it even influenced the art nouveau movement in Europe from the end of the 19th to early 20th century.

At present, Seto produces various ceramic items, including novelties (ceramic dolls and figurines) and fine ceramics, as well as tableware.

The most outstanding feature of Seto ware is its use of a wide variety of glazes. During medieval times, Seto was the only pottery center in Japan that used glazes. The glazed pottery, known as “Ko-Seto (old Seto) ware,” significantly impacted the development of tea bowls in Japan. Since the clay produced in Seto turns white through firing, this helps produce beautiful colors of glazes, and led to outstanding progress of diverse kinds of glazes in the region.

The second feature of Seto ware is the great diversity of product types, including both earthenware and porcelain. Moreover, potters in Seto City are currently producing ceramic dolls/figurines, and industrial products such as fine ceramics.

Production of such diverse items is possible thanks to abundant high-quality kaolin and porcelain stone available in clay pits within the city. Since these materials have considerable viscosity and plasticity (the property of retaining the shaped form even after applied forces are removed), and turn white through firing, they enable production of a wide variety of ceramic items in response to various needs of both producers and consumers.

Seto, in the north central part of Aichi prefecture, is the place for pottery. Indeed, the generic term in Japanese for ceramics is "setomono" — wares from Seto. It’s a household name found literally in the cupboards and on the tabletops of just about every home in the country. Archaeological evidence suggests that high-temperature kilns capable of firing ash-glazed works were here as far back as the late 10th century. By the 12th century, Seto and Mino in Gifu prefecture were the only places in Japan able to produce glazed ceramics. There have been ups and downs, but even in the early postwar years of the late 1940s, Seto was home to more than 500 workplaces related to the ceramic industry. Seto’s potters have established a vibrant base for the mass production of a diverse range of pottery, as well as a solid distribution network both domestically and abroad.

Today some 300 business concerns make up the prefectural ceramics association. There is no knowing the number of potters who have worked in Seto, or how many tons of wares they have made. Seto has everything related to pottery: high-quality clay, shops for equipment and glazes, museums, and vocational schools.

Seto ware, ceramics manufactured in Seto by one of the so-called Six Ancient Kilns of Japan. It was first produced in the later Kamakura period toward the close of the 13th century. The origin of Seto ware is usually attributed to Katō Shirōzaemon (Tōshirō), who is said to have studied ceramic manufacture in southern China and produced pottery of his own in the Seto district upon his return.

The first person to begin making porcelain in Seto was Tamikichi Kato, the son of a local potter. After learning porcelain methods in Kyushu, Kato was central to advancing manufacture of the Seto sometsuke blue-and-white style. The two men are enshrined at Fukagawa and Kamagami Shrines, respectively.