Check out the unsutual silhouette of this modern kokeshi doll. She is so elegant. We adore her peaceful expression and the hand-painted flowers on her torso are just beautiful. 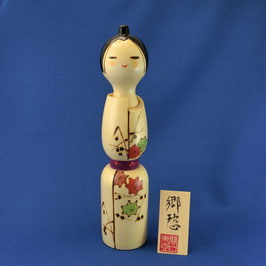 *The doll is handmade, may differ slightly from the product photo.

Son of the famous Sansaku Sekiguchi, Toa was born in Shibukawa City, Gunma Prefecture in 1947 , and still lives and works there with his family, all of whom create Sousaku Kokeshi (creative Kokeshi). Winner of many awards, he received the Ministry of International Trade Industry Award in 1978. Since then he has won the Prime Minister’s Award, along with other respected commendations.

Toa-san often employs beatifully painted Mizuki (Dogwood), for his pieces. We see all types of motifs used, including festival elements representing fireworks, and natural elements such as abstracted Gingko leaves, (Ginkgo trees survived the atomic bomb dropped on Hiroshima in 1945, and are considered a “bearer of hope”). We additionally see wheat, plum flowers, cloud-filled skies, and evening sunsets. Many pieces illustrate long hair executed by deep carving to define the hair strands. Toa definitely shows off his artistic, painterly abilities with beautiful creations in black, grey, vermillion, and gold.

Kokeshi dolls are made from natural wood and handmade by artisans. Though they create the same kokeshi dolls as the product photos, the appearances of them such as colors, shapes, grain, facial expression may be a little different from pictures. Please accept the matter of these slight differences.