A round shaped Kyusu teapot by Jinsui (人 水) ceramic studio in Tokoname (Aichi prefecture), one of the six oldest ceramic production regions in Japan.

Using a rare golden crystalline glaze, this unique and modern teapot shines in the light and has a metallic-like texture. It also features an ultra thin-walled that weighs only about 150g.

A bold and elegant Kyusu created with a tradition of craftsmanship and a meticulous manufacturing method. Each one is a unique piece and appears the glaze pattern in different results. Enjoy the accidental surprises that can never be reproduced! Perfect for anyone who loves ceramics and pottery art. Very special addition to your tea utensils.

4) For 260 ml in volume, the perfect size for brewing a cup of tea, making it a perfect gift. 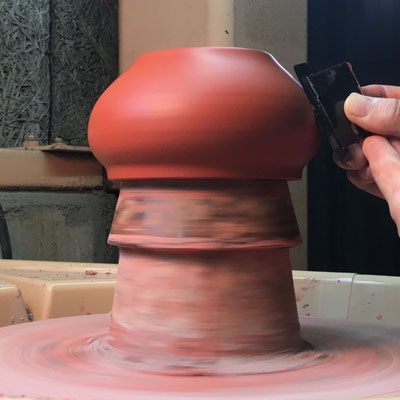 Ceramics studio Jinsui is one of the six oldest studios in the Tokoname ceramic production region in Aichi prefcture, Japan. The studio was started in 1900 by Yasumasa Watanabe as Yamaya Yasumasa Watanabe, and in 1971 was renamed Jinsui by his son Yoshiji. Toshimasa became the 3rd generation master in 1990, and Yasumasa's great grandson Yusuke continues the business today as the 4th head since 2011.